What follows is my provisional translation (in other words, not official or authorized; see here for more) of a Tablet of ʻAbduʼl-Bahá. This facsimile of the original text, which is unpublished—along with the photographs below—were kindly supplied to me by Hoda Hosseini, the great-great-granddaughter of Jináb-i-Ilyáhú, the recipient of this Tablet. Jináb-i-Ilyáhú was the maternal great-grandfather of the renowned artist, Mahmehr Vahdat Golestaneh.

During the Persian famine of 1917–1919, Jináb-i-Ilyáhú and his sons, Ḥáj Shaʻbán and Ḥáj Dávúd, would host gatherings (“firesides”) at one of their properties, known as the Ṣáḥib-Díván, which was located in central Ṭihrán in the historic ʻÚdláján neighborhood. A large white flag bearing the Greatest Name (Yá Baháʼu’l-Abhá / یا بهاء الأبهی) was hoisted on the roof of this building. Baháʼís were invited to speak about the Faith and ample quantities of food were given to all who entered.

During a visit to ʻAbdu’l-Bahá, Ḥájí Abu’l-Ḥasan Amín—the famed Trustee of the Ḥuqúq, who had been present at these gatherings—shared his experience with Him, and He wrote the Tablet below as a result.

A historical detail that Hoda feels ought to be preserved: This family, the Iqrárís (Eghraris), like many other Jews, came from humble beginnings. At the turn of the century in Qájár Persia, they were not just second-class citizens, but oppressed minorities forced to live in segregated areas. It was only the early Baháʼís who would visit them to tell them about their Faith—and once they embraced it, their fortunes took a turn for the better. The wealth they accrued after they became Baháʼís enabled them to purchase the Ṣáḥib-Díván, which once belonged to the son-in-law of the sháh; hoist the banner bearing the Greatest Name; and do everything within their means and power to promote the religion. The tradition that started with Jináb-i-Ilyáhú and his sons, and was immortally hailed by ʻAbdu’l-Bahá in the Tablet below, continues to this day, and the family attributes their success, prosperity, and desire to hold firesides to the conversion and endeavors of their distinguished ancestors. 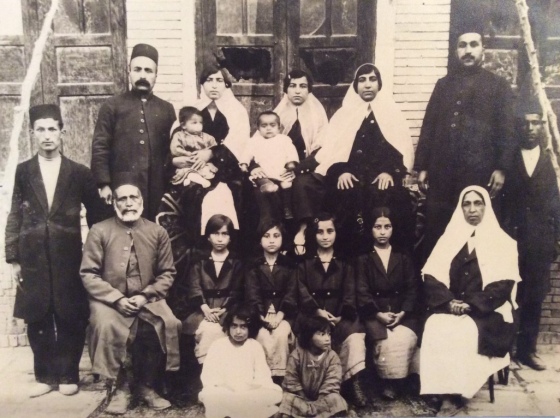 Standing on either side are two apprentices who were employed at the tijárat-khániy-i-Iqrárí, a group of shops owned by the Iqrárí family. Both eventually became Baháʼís. One of them (it is not known which one) was named Taʼíd, and he later became the father of a certain martyr. The identity of the other apprentice is unknown.

According to Mahmehr Golestaneh, this picture was probably taken in 1921.

O thou who art firm in the Covenant! The banquet-spread which thou didst lay out, and the wholesome feast of plenty thou didst prepare, was truly a celestial festivity and a heavenly repast. Although ʻAbdu’l-Bahá was distant in body, yet in heart and soul he was present at that gathering. Such occasions as these proceed from the loftiness of one’s nature and the exaltedness of one’s being; they enkindle and lend warmth to the hearts. Through them, friends become helpers, and companions take one another in their embrace like unto a cluster of stars; they give rise to conscientious sentiments, and cause love, fellowship, and unity to appear.

Upon you be the Glory of the All-Glorious.

A typescript of the original Persian text of this Tablet, based on the above facsimile, appears below (all punctuation and vowel marks mine).